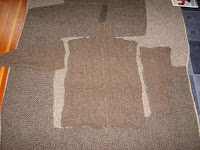 My husband and I were both listening to Michael Enright's CBC show last Sunday when he played a "read" of “Seven Jewish Children.”
We’re not dumb as stumps. We generally have the intelligence to have lively discussions on many views of many topics. But neither one of us could follow what was going on.

When they got to the part that went something like "Tell her we didn't mean to kill the babies," I couldn't listen anymore.

In the AGO they have a display of ugly knit blankets laid out on the floor. Somehow this too is art, but I don't get that either. I find myself irritated that this collection of thrift store uglies is given space and credibility in an art gallery. The play annoys me in the same way.

Margaret Beach
Posted by Brian from Toronto at 4:07 AM