What should the Govenor General do? 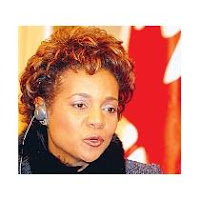 I'm no constitutional expert, but I believe the GG can do just about anything she wants, and the arguments are really about what she should do.

If the Liberals, the NDP and the Bloc defeat the govt in January, Harper will ask for a new election and Dion will ask for a chance to govern with a Liberal-NDP coalition propped up by the Bloc.

Some say she should order a new election because (a) it's her job to follow the prime minister's advice - an argument that doesn't persuade me - or (b) because it's traditional for Canadians to elect their govt. and we sure haven't elected this coalition - an argument I find far more persuasive.

Others say the GG should give the coalition a chance because, while we elect our members of parliament, it's up to our MPs to elect the govt, and if Dion's coalition can command a majority among the MPs, the coalition deserves a chance to govern. I also find this argument persuasive.

However, the coalition isn't requesting just one chance - they're actually requesting two: a govt led by Dion until May and then a govt led by whoever replaces Dion after May. This is absurd.

In our system, when a new leader replaces a sitting Prime Minister, he must call an election to get a mandate from the people.

So I'm okay with the GG calling a new election should the govt fall in January. Personally, that's what I'd prefer. But I'm also okay with her giving the coalition a chance, but only provided they pledge to hold an election within six months of getting a new leader, as convention demands.

Could the GG require such an undertaking? Absolutely. At this point, she holds all the cards. For the sake of our democracy, she should play them.
Posted by Brian from Toronto at 2:14 PM 3 comments: