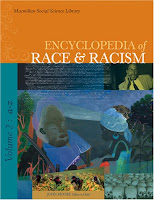 Next time your kids look up ‘Zionism’ in an encyclopedia, they may read that Israel is a racist state based on an ideology akin to Nazism. This article, recycling the old lie that Zionism is racism, appears in the new Encyclopedia of Race and Racism published by Macmillan Reference U.S.A.
The American Jewish Committee (AJC) notes that Noel Ignatiev, the author of the article, “has no track record of scholarship in Middle Eastern or Jewish studies.” (See here: http://blog.z-word.com/category/macmillan-reference/) Earlier versions of Ignatiev’s Zionism article appear in an obscure rag called Race Traitor and in Counterpunch, a self-described “muckraking” magazine notorious not just for Israel-bashing but for antisemitism.

The Macmillan Zionism entry shows none of the objectivity and scholarship you usually find in an encyclopaedia, but it does have everything you’d expect from an article in Counterpunch: it’s tendentious, offensive and wrong.

Perhaps worst of all, the entry conflates Zionism and Nazism. Ignatiev claims that Zionism: “shared the [Nazi] belief that the Jews were a racial community based on blood.” Beyond the obvious falsehood here (i.e., that Zionists see Jews as a race), Ignatiev is implying that Zionists used the same language of race and blood as the Nazis and shared the same outlook as the Nazis. Indeed, he goes on to claim that Zionists “collaborated” with the Nazis.

Why in the world did the editors choose Ignatiev to author this encyclopedia entry? This incident damages Macmillan U.S.A’s reputation and the reputation of its parent company, Gale, Cengage Learning. It doubly damages their reputation since it raises an obvious question: As the author of the Zionism article has an anti-Israel track record, how many other entries were written by someone with a political agenda?

Underlining the scandal, no other form of nationalism appears in the Macmillan encyclopedia, only Jewish nationalism. The name for this kind of practice might be found under D for discrimination.

Worse, the AJC reports that John Hartwell Moore, the encyclopedia’s editor-in-chief, defended the Zionism entry by suggesting that Zionism is racist because it embodies an idea of racial superiority based on the idea of Jews as a chosen people. That is, Moore defended the modern slander that Zionism is racism by reaching for an older anti-Jewish slander that Jews think of themselves as superior. But although these notions of ‘chosen-ness’ as meaning superior and of Jews as a race have been widely spread by antisemites, they have no basis in Jewish reality.

For starters, early Zionists were a secular lot, and in the unlikely event that they had wanted to borrow a theological concept, they wouldn’t have picked chosen-ness, the idea that God set apart the Jews for particular religious obligations. After all, the Zionist project was about making the Jews a normal nation with our own country, not a people set apart in any way.

The lies Ignatiev peddles in his Macmillan entry aren’t new. They originated during the Cold War when the Soviets decided to use antisemitism in their efforts to orient the Third World against the West. Soviet propagandists manufactured the notion that Jewish nationalism is inherently racist and that Jews are the new Nazis, then spread this manure to Communists around the world and taught it to a generation of potential Third World leaders.

Mahmoud Abbas, for example, the current president of the Palestinian Authority, received his doctorate at a Soviet institution by writing a pseudo-academic thesis on supposed Zionist collaboration with the Nazis. For good measure, he added some Holocaust denial to his thesis, claiming that numbers killed were grossly exaggerated.

I suggest that Macmillan replace its entry on Zionism with an article on the durability of antisemitic myths. The Soviet Union has collapsed into the dust of history but its propaganda lives on. It's even managed to worm its way into an encyclopedia published by a hitherto reputable company.

In an attempt to quiet its critics, Macmillan has announced it will add alternative perspectives on Zionism to the on-line version of encyclopedia alongside Igantiev’s propaganda piece (http://tinyurl.com/6dq2fl). But treating lies and truth as equals subverts the very idea of knowledge. And an encyclopedia is supposed to be a compendium of knowledge – not a hodgepodge of knowledge and nonsense.

Academics especially, but ordinary people too, need to insist to Macmillan Reference and its parent company, Gale Cengage Learning, that an entry on Zionism simply has no place in an encyclopedia of racism.

Note: This piece also appeared in the Engage Forum: http://www.engageonline.org.uk/blog/article.php?id=2241

And in the Jewish Tribune: http://tinyurl.com/6msl7j
Posted by Brian from Toronto at 4:50 PM 1 comment:

The UN – Curse or Blessing? 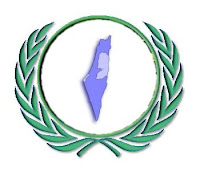 “Canadians love the idea of the United Nations, but know little about it,” said Dr. Adam Chapnick in a recent lecture at Beth Tikvah’s popular Lunch and Learn program. Chapnick explained that in surveys Canadians consistently rank second or third among the countries of the world in our support for the UN.

Given that the General Assembly often seems obsessed with denigrating Israel, I find the Canadian enthusiasm for the UN worrying. Not Dr. Chapnick. He suggested that most Canadians pay no attention to anti-Israel reports issuing from the UN. “It goes in one ear, out the other,” he said. The General Assembly’s many anti-Israel resolutions may embolden anti-Israel propagandists, but they don’t change how anyone sees Israel.

Currently an Assistant Professor of Defence Studies and Deputy Chair of Education at Canadian Forces College, Dr. Chapnick has a particular interest in the history of Canada’s involvement with the UN and the place the UN holds in our national mythology.

According to Chapnick, President Roosevelt, one of the principal architects of the UN, envisioned the General Assembly as a forum where “small countries can vent.”

Also, Chapnick explained that the UN’s primary purpose is to prevent a third world war, and, he argued, in this, the UN has been successful. Moreover, he pointed out the UN’s usefulness in disaster relief efforts, such as the 2004 Tsunami in the Indian Ocean, and in disease eradication programs, such as the elimination of polio.

Ultimately, Chapnick said that blaming the UN is a mistake. He suggested that the UN is a place where countries gather to talk. What gets done and doesn’t get done in the world is up to individual countries, which can and do act without UN authorization. Even Canada acts without the UN’s blessing, he said, such participating in NATO’s military intervention in Kosovo.

When the UN supports them, countries use the UN “to cloak themselves in legitimacy,” and when the UN doesn’t support them, they ignore it.
Posted by Brian from Toronto at 11:55 AM No comments: