The plan: To pay for Toronto subways, tax everybody in Ontario for everything, but especially drivers

It’s official. The province’s transportation agency, Metrolinx, wants everyone in Ontario to chip in for Toronto subways, but especially drivers. They’ve proposed adding an extra one percent tax on the HST, plus an extra 5 cents on every litre of gas.

According to Metrolinx, this will cost each of us an average of $500 a year. Unless you live in the suburbs, say Burlington or Oakville, with three kids (or two kids and a live-in parent), you’re a two-car family, and  you commutes into Toronto. Then double that bill: you’ll pay an extra $1,000 a year.

Not all the money will go to Toronto subways. Some of it will be spread out to the suburbs as improved bus service, a "light rail" line (i.e., a streetcar) up Hurontario in Mississaauga, maybe even a couple of extra cars for the GO train. But none of the $50 billion dollars the government plans to spend will come specifically from people who actually use transit.

Oh, transit users will pay an extra one percent on everything, just like the poor schlub in Sudbury who drives to Toronto just once every five years for a Jays’ game, but no increase in subway fares, you understand, no rise in the price of GO tickets. It’s only drivers who specifically get dinged.

The spin is that better transit is better for drivers, too. It’s a kind of trickle up theory. If more people can be persuaded to take transit, there will be fewer cars on the road and less traffic congestion. Except nobody actually believes this.

But even this is nonsense. What drives traffic congestion is a growing population. If Toronto turns into an economic disaster zone – Ontario’s version of a Newfoundland outport – traffic will improve marvellously, because we’ll all move to Alberta.

But if the Toronto area continues to grow, traffic is going to get worse. Eventually, if we’re lucky and the economy continues to expand, we’ll turn into New York or London, and then traffic will truly be a mess.

The real argument for improved transit is simply that better transit can move more people around, and in the Toronto area, we have lots of people who need to get about. Hopefully, in the future, we’ll have even more. So we do need to expand the transit system.

But don't let them kid you. If you’re a driver, better transit will do nothing to shorten your daily commute. Nada. The claim that it will is pure spin without a fact to anchor to.

So here’s where I stand:

First, if anyone’s going to be specifically targeted to pay more than everyone else for better transit, it should be people who use transit, not drivers.

Second, if the government wants an extra $50 billion from us at $2 billion a year – and that’s an improbable minimum, as transit projects always come in way over budget – then it has to be a government that’s careful with our money. Do I have to say the Liberals don’t qualify?

Third, let's start by finding at least some of the money in the province's existing $128 billion-a-year budget. How about half: carve out a billion from the existing budget, and we'll pony up another billion a year in new taxes. As it stands, though, the Liberals don't plan to cut the existing budget by a nickle. Raising our taxes is the only mover they know.

Third, if the government wants a massive tax increase, it needs to bring their case to the people and let us vote on it.

Fourth, the one tax I certainly support is a toll for single-occupancy vehicles to use High Occupancy Vehicle lanes on highways. If you drive, you've seen those empty HOV lanes and you know that as a tool for convincing people to car pool, HOV lanes have been a bust.

So by all means, let cars with two or more occupants use them for free, but if other people are willing to pay for them, great! It’s a win – win situation. People in a hurry get where they’re going faster, and we all pay a little less in taxes elsewhere.

It’s the one and only “revenue tool” that’s painless. It’s also the one and only tool that’s been taken off the table. Why? The NDP doesn’t believe you should be able to get something just because you can pay for it – it goes against socialist principles.

So killing the only painless “revenue tool” was part of the NDP’s price for supporting the Liberal budget.

Posted by Brian from Toronto at 4:21 AM No comments: 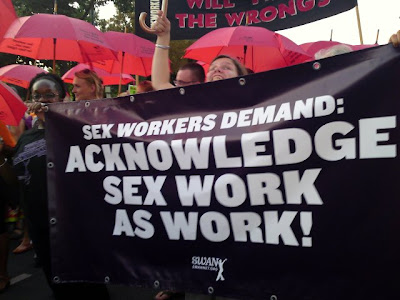 Every year, the Toronto District School Board publishes a Days of Significance Calendar for students. It includes the holidays of different religions and various UN mandated observances. May 15, for example, is the International Day of Families.

The TDSB also includes the International Day to End Violence Against Sex Workers on the Calendar.

You might find it odd that the Board thinks violence against sex workers is an issue school kids should worry about. I certainly do. I hope that for most of their school careers our kids won’t even know sex workers exist.

The Board could choose to highlight all sorts of different days. For instance, National Library week was October 17 – 24 and National School Library Day was October 22.  But these don't make it onto the School Board’s Calendar. So why do sex workers rate and librarians don’t?

Other international days get on the Calendar because they were declared by the UN. Not the sex workers’ day. It was actually started by sex workers. Specifically by Annie Sprinkle (that would be her professional name, you understand) and the Sex Workers Outreach Project.

But Maggie’s focus is also political. As with all the prostitutes’ groups organizing around the December 17th sex workers’ day, they “advocate for removal of all laws that criminalize sex work.”

Or as the Dec 17th Organization headquartered in New York puts it, they oppose “the stigma and discrimination that is perpetuated by the prohibitionist laws [against prostitution].”

Of course violence against sex workers is wrong. Indeed, it's illegal, as is violence perpetrated against anyone. As for prostitution laws, I don’t have strong opinions one way or the other. But I am clear that the Toronto School Board shouldn’t be jumping in to support any political goal. Period.

Unfortunately, it's not clear that the Board understands this.

And I find it almost beyond belief that the Board has chosen to promote a day that’s especially set aside to promote the rights of sex workers and the repeal of prostitution laws.

Initially, I supposed that the inclusion of the sex workers' day on the Days of Significance Calendar must be some sort of screw up. Once I brought it to the Board’s attention, I figured the sex workers day would be dropped from the on-line version of the Calendar immediately, and I’d get an embarrassed but thankful email for bringing this to their attention.

That was six weeks ago. I’ve had assurance from the Board that they're taking my concerns seriously, but the International Day to End Violence Against Sex Workers remains on the Days of Significance Calendar.

As far as I can tell it’s not a slip-up at all. the sex workers day has been on the Board's calendar for at least two years, because in its wisdom, the Toronto District School Board chose to promote December 17th – that special day set aside for prostitutes, strippers, and dominatrixes and the rights of young people to choose such professions without shame.

Posted by Brian from Toronto at 7:54 PM 3 comments: