A world movement of terrorists and lunatics 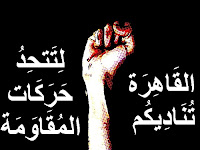 Once a year radical Islamist groups such as Hamas, Hezbollah, and Jamaat al-Islamiya (an official al Qaeda franchise best known for murdering 71 tourists in Egypt in 1997) gather in Cairo. At this conference, they sit down to talk strategy with the worldwide “anti-imperialist” left. And every year, there’s a Canadian contingent.

This year, according to the Ottawa Citizen, the Canadian Arab Federation was there represented by Ali Mallah, who also represented the Canadian Union of Public Employees. Mallah has attended four out of five of the past Cairo Conferences on behalf of CUPE.

The Coalition Against Israeli Apartheid (CAIA) was in Cairo, too. Hopefully they were hearing about Palestinians in Lebanon so they could learn what actual apartheid looks like. But not likely – at this conference, honesty was blacklisted.

The CAIA’s sister organization Not In Our Name – Jews Against Israel's Wars was also in Cairo, doubtless waving safe-conduct passes.

According to the Ottawa Citizen, Cairo attendee “Suzanne Rice” (apparently a misidentification of Suzanne Weiss of Not In Our Name) enthusiastically declared: “What we saw in Cairo were the first signs that a world movement is beginning to come together.”

Wonderful. Hamas, Hezbollah, al Qaeda and the rest of the witch’s brew of Islamist terrorists are dedicated to fighting America, extinguishing Israel and killing Jews. That CUPE and other Canadian groups seek out such associates says ugly things about them.

The Cairo Conference Declaration was big on Hezbollah’s “heroic resistance” to the “Zionist entity.” (Yes, that’s the term they use.) The conference also praised Hamas’s “refusal to surrender to … the Oslo agreements” and called for “a revival of the Intifada and the weapon of resistance.” In other words: peace no, human bombs yes.

The conference also urged boycotts against the Zionist entity. Not surprisingly many international attendees agitate for such boycotts in their own countries. John Rees of the British Socialist Workers Party (SWP) was in Cairo. In Britain, the SWP and similar far left types are behind the proposed British academic blacklist of Israeli scholars and universities.

The Apartheid Coalition is especially close with CUPE Local 3903. This local represents contract faculty, teaching assistants and graduate assistants at York University, a group that just happens to have more to do with lunatic politics than with traditional unionism.

CUPE Ontario is developing: “an education campaign about the apartheid nature of the Israeli state” in consultation with Palestinian and “human rights” groups. Given CUPE’s pilgrimages to the annual Cairo Conference, I wonder who they’re consulting.

Of course Hamas is busy lately. When they’re not firing missiles at Israeli civilians, they’re murdering fellow Palestinians – throwing Fatah supporters from rooftops and executing them in front of their wives and children, all in aid of Hamas’s bloody coup in Gaza.

With Hamas so heavily engaged, I suspect the Apartheid Coalition is helping CUPE develop its mis-information campaign.

“In Canada, we have built a broad alliance … called the Coalition Against Israeli Apartheid (CAIA), uniting … fighters against Zionism. CAIA has a Jewish sister organization called Not In Our Name (NION).”

But in fact the politics of Jews who hate Israel are just as anti-Jewish as the politics of their gentile comrades. What, after all, can you say about people who make common cause with Hezbollah, Hamas and al Qaeda – groups that aren’t shy about their desire to kill all Jews everywhere?

P.S. OPIRG (which I think stands for the Ontario Fascist Interest Research Group;) provides this list of some of the Canadian participants in the Cairo Conference:

Note: Earlier versions of this article appeared in the June 21, 2007, Jewish Trbune (http://www.jewishtribune.ca/TribuneV2/), a community paper published weekly by B'nai Brith Canada, and in the Engage Forum (http://engageonline.wordpress.com/).

You can find a collection of Brian’s pieces here: http://tinyurl.com/9xqne8
Posted by Brian from Toronto at 7:47 PM