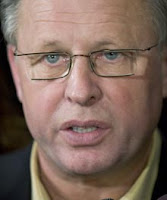 He’s probably Canada’s most prominent Israel-basher: Sid Ryan, President of CUPE, Canada’s largest union. The Jewish Tribune reports that at a recent anti-Israel protest, Sid said, “Jews have no right to be there [in Israel] in the first place” (http://tinyurl.com/7lfgyk).
Contacted by the Tribune for clarification, Sid said that the conflict with Hamas wouldn’t be happening if not for “Israel’s occupation of Palestinian lands for the past 60 years.” That is, since 1948 when the State of Israel was established.
It’s not really a surprise that Sid apparently considers Tel Aviv occupied Arab territory. Back in 2006, CUPE’s Ontario branch passed a motion to boycott Israeli goods and called for an end to “the occupation.” I pointed out at the time that the people who framed that resolution consider all of Israel occupied. (see “CUPE’s Ally,” http://tinyurl.com/75rkj2).
Also, CUPE sends a representative to the annual Cairo Conference where Islamist terrorists sit down to discuss strategy with the “anti-imperialist” left (see: A World Movement of Terrorists and Lunatics http://tinyurl.com/9kydbq). Groups such as Hamas and al Qaeda prefer murder, CUPE prefers boycott, but they're agreed in their loathing for the Zionist entity.
Sid’s latest antic is a call for CUPE to "ban Israeli academics doing speaking, teaching or research work at Ontario universities” (http://tinyurl.com/a5qouh).
Maybe someone should tell Sid that blacklisting people because of their nationality breaks Canadian anti-discrimination law.
Or has discrimination become a progressive cause?
Perhaps. Sid at any rate seems to like comparing Israelis to Nazis, which in my books is just plain Jew-bating.
And maybe someone should tell Sid that CUPE doesn’t represent full-time faculty at Canadian universities, so CUPE can’t ban Israeli scholars.
Or have delusions of power become another progressive cause?
Perhaps, or perhaps just a progressive disease - one leading to blindness to reality and the atrophy of all moral sense.