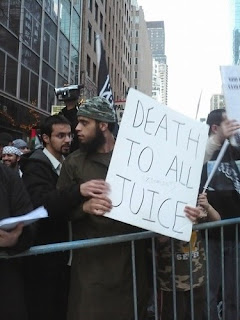 It’s bad enough that among all the nations of the world CUPE Ontario chose to boycott a liberal democracy – the only democracy in the Middle East. But to clarify exactly where it stands on the political compass, CUPE has also aligned itself with a Palestinian group that is pro-Hamas.

It hasn’t been much noted, but in its anti-Israel resolution, the Canadian Union of Public Employees (CUPE) Ontario commits itself to creating an educational campaign “with Palestine solidarity,” a group represented at the CUPE convention by one of the leaders of the Toronto wing, Rafeef Ziadah.

The CUPE motion adopts the language and positions of Palestine solidarity, most obviously in the attempt to smear Israel an illegitimate, apartheid state and in the demand for the "right of return." This doesn’t refer to a right for Palestinians to settle in a future Palestinian state. It’s a demand to turn Israel into an Arab state by giving automatic citizenship to the 4 million grandchildren of Palestinians displaced during Arab wars against Israel.

CUPE also adopts the term "Israeli state" from Palestine solidarity. The group uses only the adjective “Israeli,” not the noun “Israel,” which names a state they wish to eradicate. In other words, "Israeli state" is an updated synonym for "Zionist entity” but it’s meant to be more broadly acceptable and, perhaps, by rhyme, structure and association of ideas to recall the phrase "Nazi state."

(Similarly, the deligitimization of Israel as an “apartheid state” just repackages the old “Zionism is racism” canard. The accusation applies a blatant double-standard, as only Jewish nationalism is criminalized, and behind the double-standard stands a long history of branding Jews as intrinsically criminal.)

Alongside of not recognizing Israel, Palestine solidarity regards all of Israel as occupied territory. Similarly, the CUPE resolution refers to "the occupation of Palestine.” Likely most of the delegates believed this was a reference to the occupied West Bank, but the framers of the resolution doubtless had in mind all of Israel.

Still, while not understanding every word of the resolution, when they voted unanimously to approve the "right of return” and to condemn Israel as an illegal, "apartheid" state, all 896 delegates surely understood they were voting in favour ending Israel’s existence. Abraham Foxman of the Anti-Defamation League has been widely quoted as saying that CUPE hasn't taken into account recent political developments such as the Israeli withdrawal from Gaza and the election of the terrorist group Hamas to lead the Palestinian Authority.

Quite the contrary is true. The people who crafted this motion consider the Hamas victory a good thing, the peace process an instrument of apartheid, and President Abbas a traitor. At least this is the position of Rafeef Ziadah and Palestine solidarity.

In a March 4, 2006, article published in the magazine Left Turn, Notes From the Global Intifadah and on the international Palestine solidarity website, Ziadah and Adam Hanieh, another leader of Palestine solidarity in Toronto and a CUPE member, set out their views. They write about: “The overdue end of the Oslo process and its attempt to narrow the ‘Palestinian question’ to a state-building project in the West Bank and Gaza Strip.” That is, as opposed to a Palestinian state in all of “historic Palestine.”

Hamas' victory is a striking indictment of this so-called "peace process."
Promoted with the deliberate deceit of Western governments and the corporate
media, the myth of negotiations was fully shared in by the leadership of the
Palestinian Authority (PA), most particularly by individuals such as
Palestinian President Abu Mazen [Abbas] and Prime Minister Abu Ala.

The PA leadership came to represent submission and surrender under the banner of peaceful negotiations and empty condemnation of violence. Indeed, immediately prior to the Legislative Council elections, Hamas leader Khaled Mishaal pointed out that "the experiment of fifty years taught us this road was futile" and Hamas would not continue to deceive the Palestinian people with this "political fiction."

On the other hand, while CUPE Ontario does represent 200,000 workers at the bargaining table, it doesn't in any way represent the politics of its members. Most CUPE members would be appalled if they understood their union was allying itself with the suicide bombers.

Indeed, in the past few weeks, CUPE’s anti-Israel motion has been widely condemned. On the Michael Coren show (a Toronto TV talk show), Sid Ryan, the president of CUPE Ontario, responded by berating the “Jewish lobby.” Challenged by host Michael Coren to say who precisely he meant, Ryan had no reply, but simply asserted that “this lobby will not push me one inch, not one inch.”

So who is this “Jewish Lobby” that’s trying to push around Sid Ryan? Of course, there are the major Canadian Jewish organizations, such as B’nai Brith which has issued a “manifesto” denouncing the CUPE resolution. To date, thousands of Canadians, Jewish and non-Jewish, including many CUPE members have signed the manifesto.

The “Jewish Lobby” is also CUPE local 265, which withdrew from CUPE Ontario in protest. The “Jewish Lobby” is Buzz Hargrove, president of the Canadian Autoworkers, Canada’s largest private sector union, who wrote an op-ed for the Toronto Star disagreeing with the CUPE resolution. The labour movement, Hargrove argued, should encourage peace “with calls for genuine dialogue and exchange, not by finger-pointing and boycotts.”

The “Jewish Lobby” is columnists such as Rex Murphy in the Globe and Mail who denounced CUPE for smearing Israel with the apartheid label, Jonathan Kay in the National Post, who characterized CUPE’s stance as bigotry, Naomi Lakritz in the Calgary Herald who called CUPE antisemitic, and of course Michael Coren, a personal friend of Sid Ryan’s, who described his union’s resolution as shameful and suggested Ryan’s talk about “the Jewish lobby” might be described as racist.

In short, the “Jewish lobby” in Canada is like the “Israel lobby” described by Mearsheimer and Walt in the United States: it includes everyone who happens to disagree with anti-Israel bigots.

I previously published this article in the June 15, 2006, Jewish Tribune and on the Engage Website, where you can find a collection of my pieces, including this one: http://tinyurl.com/9xqne8
Posted by Brian from Toronto at 2:51 PM