The UN, the media and antisemitism 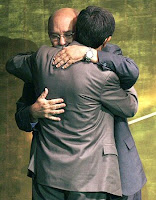 The best thing about the General Assembly of the United Nations is that it’s almost always ignored. This was brought home to me recently when I was scanning the reader comments on a story about Israel in the Globe and Mail.
Among the usual accusations that the Jews control the media and similar “criticism of Israel” as they like to call it, one reader complained that Israel had kicked out the UN human rights rapporteur.
It was the first I’d heard of it. A minute’s research showed that Press TV played the story big, but then Press TV is owned by the antisemitic regime in Iran. The Israeli media covered it of course, and so did other media that pays special attention to Israel. But the Canadian media ignored the story.
Why? Two reasons I think. First, because the media mostly ignores international antisemitism. Second, because when it comes to human rights, the UN has no credibility. The UN Human Rights Council is a club for the world’s worst human rights abusers, and Richard Falk, the rapporteur whom Israel kicked out, embodies the UN’s perverse perspective.
Falk believes international law gives Hamas the “right of resistance.” But while giving Hamas a pass, Falk compares Israelis to Nazis, a comparison so far removed from reality that it can only be understood as Jew-baiting – the 21st Century equivalent of calling Jews “kikes.”
Mind you, Falk isn’t deluded only about Israel. He also suspects that the U.S. inflicted the September 11 terrorist attacks on itself. Any day, I’m expecting to read that Falk believes the moon landing was faked, too.
Miguel d'Escoto Brockmann, president of the UN General Assembly, condemned Israel for expelling Falk. But then d’Escoto has his own Jewish problem. In September, president Ahmadinejad of Iran gave an antisemitic rant at the UN, saying that “Zionists” (meaning Jews) control the money supply and secretly rule “some European countries and the US in a deceitful, complex and furtive manner.”

Barack Obama, president-elect of the U.S. condemned Ahmadinejad’s words as hateful and antisemitic. Miguel d’Escoto President of the UN General Assembly reacted rather differently: he embraced Ahmadinejad in a warm hug. (That’s Ahmadinejad and d’Escoto in the photo.)
But d’Escoto doesn’t just embrace the Jew-hatred of others. Every year at the end of November, the General Assembly mourns the creation of Israel with a “UN Day of Solidarity with the Palestinian People.”
This year, the General Assembly went beyond even its usual Israel-bashing when d’Escoto called for an organized boycott against Israel to force it into submission and accused Israel of “crucifying” the Palestinians.
D’Escoto, I should note, is a Catholic priest who’s been suspended by the Vatican – but for his political activities on behalf of Nicaragua’s corrupt governments, not for the kind of religious antisemitism rejected by the Vatican and embodied in accusations of Jews crucifying people.
Mostly, the media ignored d’Escoto’s capers, just as it ignores the Human Rights Council’s squirrely rapporteur, just as it ignores almost everything coming out of the UN’s General Assembly, because really, who can take the place seriously?

But Ahmadinejad is serious. He’s the president of a bellicose nation on its way to acquiring nuclear weapons, and the world media widely reported Ahmadinejad’s speech to the UN. For the most part, though, the media gave no hint that his speech was infused with Jew-hatred.

The CBC focused on Ahmadinejad’s complaints of U.S. “bullying,” a complaint likely to gain approval from the CBC’s audience. The Toronto Star’s Olivia Ward began her report by claiming that Ahmadinejad took “a high moral tone.” It was left to the more rightwing CanWest media to report Ahmadinejad’s antisemitic ranting.

It seems the Iranian regime’s Jew-hatred doesn’t fit the agenda our more left-leaning media. Even the Globe and Mail carried an AP story that stated merely that Ahmadinejad “criticized Israel.”

Such bleaching of reality seems to be what passes for objectivity in the media these days. Thus, for example, did the BBC report in Mumbai that “gunmen” (not “terrorists” of course) were “holding people captive in an office block.”

To report that these “people” were Jews and that the “office block” was the only Jewish community centre in a city of millions of Hindus might remind viewers that the “militants” subscribe to a genocidal Jew-hatred. The BBC evidently felt that would be too real, not their sort of objectivity at all.