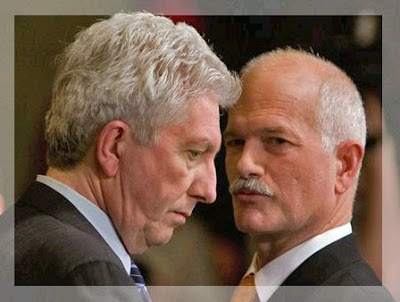 Everyone who watches the polls knows that the only thing the NDP or Liberals can expect from an election is fewer seats for them and more for the Conservatives. Could be the Conservatives will even win a majority.

But the Liberals are tired of looking like wusses. They've propped up the Conservatives since the last election and figure it's the NDP's turn.

However, Jack Layton can't support the Conservatives. It doesn't matter how many of Jack's policies and spending priorities the Conservatives put in the budget. The Dippers just plain hate Harper. They hate him with passion that's beyond reason.

Make a deal with the devil? No way. As far as rank and file members of the NDP are concerned, Stephen Harper is worse than Satan.

Jack Layton can't be this blinded himself. You don't get to be party leader, not even leader of the NDP, if you've taken leave of your senses. But what does Jack have to lose? We know about his health problems. Most likely this is his last election. Better to go out leading a hopeless charge against the Evil Ones than to be remembered as the guy who bowed to Harper.

As for the Liberals, they stand to lose even worse than the NDP. But some Liberals - call them the Justin Trudeau camp - share the NDP's hubris. They believe themselves so obviously superior to the Conservatives that of course Canadians will vote for them. This view is especially prevalent in safe Liberal seats, like the one held by Justin.

Other Liberals - call them the knives in waiting camp - cannot believe that Ignatief has turned out to be such a hopeless leader. He's even worse than What's-his-name, the last Liberal leader whose main election policy was to raise the price of gasoline.

Bob Rae? Personally I think he's a nice guy and principled, but get real. He's an ex-NDP premier who masterminded the largest provincial debt in history.

So how abot about Trudeau? Sure he's callow and shallow, but his dad was famous. What more do you want?

Posted by Brian from Toronto at 4:29 AM