The one-state conference at York University: A Rogue’s Gallery 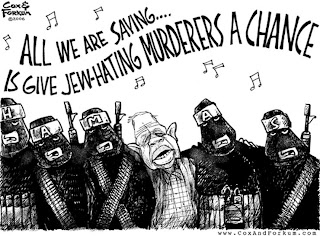 Some serious and well-meaning academics attended the conference at York University. If they were sufficiently well-meaning to express sympathy for Israel, they were abused and heckled from the floor. “This is an academic conference or at least it’s supposed to be,” protested Na’ama Carmi, a conference speaker from Haifa University.

Carmi was brave to attend, but if she supposed it was ever seriously meant as an academic conference, she was mistaken. Really, it was a propaganda event. Discussion of any Palestinian responsibility for the conflict was excluded, while Israel was under constant attack. The conference’s purpose was political; namely, to attack the legitimacy of the State of Israel and to present the replacement of Israel with a bi-national Palestinian-Jewish state as a legitimate alternative policy goal.

Here's a few of the cnfernce attendees:

Ali Abunimah: No one would mistake Abunimah for an academic. He’s a professional propagandist and the co-founder of Electronic Intifada. Electronic Intifada supports the murder of innocent men, women and children as "resistance." Abunimah demonizes Israel as an apartheid state and engages in Jew-baiting by likening Israelis to Nazis.

Abunimah won’t merely be presenting at the York conference. He’s a member of the advisory committee, responsible for recommending the conference speakers. I'm not as familiar with the other organizers, but I'm confident that if David Duke (former Grand Wizard of the Klan) were on a committee recommending speakers for a conference about the future of the American South and what to do about tensions between Blacks and Whites, nobody would be saying, "But he's only one of the organizers – the rest aren't as bad."

Abigail Bakan: Bakan is Professor of Political Studies and Women's Studies at Queen's University in Kingston, Canada. She’s also a leader the Trotskyite group, the International Socialists (a Canadian branch of Britain’s Socialist Worker’s Party) and a leader of the anti-Israel group known as NION.

Bakan reportedly was one of the representatives of NION at the 2007 Cairo conference, where radical Islamist groups such as Hamas, Hezbollah, and Jamaat al-Islamiya (a branch of al-Qaeda best known for murdering 71 tourists in Egypt in 1997) sat down to talk strategy with the worldwide “anti-imperialist” left.

The Cairo Conference Declaration was big on Hezbollah’s “heroic resistance” to the “Zionist entity.” (Yes, that’s the term they use.) And the conference praised Hamas’s “refusal to surrender to… the Oslo agreements,” and called for “a revival of the Intifada and the weapon of resistance.” In other words: two states living in peace, no; human bombs, yes.
The conference also urged boycotts against the Zionist entity in order to bring about its demise, a course of action Bakan pursues as best she can.

Omar Barghouti is a professional propagandist, not an academic,. He’s a leader of the anti-Israel boycott movement. Barghouti denigrates Israel as an apartheid state and argues that Israeli scholars, artists and musicians should be blacklisted - cut off from the rest of humanity. According to Barghouti, anyone who engages in intellectual or artisitic co-operation with Israelis is guilty of “moral blindness.” “Dialogue does not work,” says Barghouti.

Marc Ellis: A professor at Baylor College, Ellis argues that Jews worship violence and that Torah scrolls in synagogues should be replaced with replicas of helicopter gunships as symbols of what Jews really believe in. At the conference Ellis is reported to have expressed the wish that Israel would suffer a catastrophe to teach it a lesson, but alas, any such catastrophe would also engulf Palestine and the surrounding Arab states.

Jeff Halper: Halper is a pro-Palestinian activist, not an academic. He runs an organization opposing the demolition of illegally constructed Palestinian houses. According to Gerald Steinberg, of NGO Monitor:

[Halper] participated in sailing a few small boats from Cyprus to
Hamas-controlled Gaza, hoping to engage in a publicity-generating confrontations
with the Israeli navy.
Halper often appears in support of Naim Ateek, whose
speeches include classical anti-Semitic references, such as accusing Israel of
"crucifying Palestinians." …
An Israeli columnist recently witnessed Halper
urging "his Muslim listeners in an American university to reject the Arab peace
initiative, because it serves the Muslim tyrants. He told his audience that
Israel is a force that serves world capitalism, in the framework of the attempt
to make enormous populations in the world disappear.

Dana Olwan is a PhD candidate at Queen’s University, but her area is English literature. She wasn’t invited to the conference as an academic, but as an anti-Israel activist, national chair of Students for Palestinian Human Rights. Olwan spreads lies such as the claim that Israel’s creation “was legitimized through racist Zionist narratives that depicted Palestinians … as “semi-savage.” She also writes that Israel “actively engages in the ethnic cleansing of Palestinians,” a claim that is not only unture, but absurdly so as the Palestinians have had a sustained population boom for the last 40 years. At the conference, Olwan’s was speaking on using the one-state solution as a “rhetorical strategy for activists.”

Posted by Brian from Toronto at 4:54 AM