What it’s actually like to raise kids in Israel, an Israeli mother’s reaction to “Seven Jewish Children” 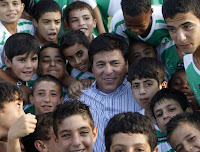 What really annoys me about the Caryl Churchill play is this: I’m an Israeli parent. I have raised 5 children in Israel, which is no easy task, over and above the normal difficulties of parenting. Like the majority of Israeli parents I have wrestled with the dilemma of how to raise happy, balanced children in an environment with so many instances of violence and fear.

But all the while, from their infancy, one tries not to opt for the easiest route. So one buys children’s books promoting Arab-Israeli co-existance. One takes them to play with the children of Arab friends. One encourages them to study hard in Arabic lessons in school. One discusses current affairs and politics, taking care to present the other point of view. When they go to the army one makes sure that they discuss their difficulties and moral dilemmas over a shabbat meal.

And then along comes Caryl Churchill and makes a complete stereotypical lie out of all those years of parenting and all those sleepless nights of dilemma.

- An Israeli Nurse (and Mom)

Photo: Israeli & Palestinian children at a soccer camp near Haifa with Argentinean football coach Daniel Passarella, 2008
Posted by Brian from Toronto at 3:36 AM