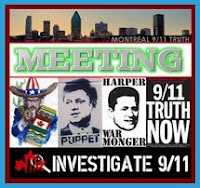 I will remember the 2008 Canadian election as the one in which three candidates were asked to step down over alleged antisemitic remarks. As the election in which a whole slew of lunatics stood for MP under the banners of supposedly mainstream parties.

First to be forced out was John Shavluck, a Green Party candidate, formerly a member of the Marijuana Party. In the midst of a semi-coherent rant against the United States (the usual stock in trade on his blog) Shavluck referred to: “your governments complicate [i.e., complicity in the] attack on your shoddily built Jewish world bank headquarters. you know 'the 2 towers'" (http://tinyurl.com/4mayn9).

There was never anything especially Jewish about the twin towers of the World Trade Center, except to people who believe Jews – and especially Jewish bankers – rule the world and to people who believe the Jews instigated the 9/11 terrorist attacks for their own nefarious purposes. The Green Party had the good sense to kick Shavluck out as soon as a blogger uncovered this posting and before the mainstream media even picked up on it.

Shavluck wasn’t the only former Marijuana Party member forced to step down during this election. As part of an apparent policy of courting the political fringes, Jack Layton had cultivated the stoner constituency. (See here, for example: http://tinyurl.com/5xx2fr). And this election, two former members of the Marijuana Party ran as NDP candidates.

Dana Larsen was the first to step down after a blogger uncovered shows he’d done for Pot TV, including one that featured him driving while stoned on LSD (http://tinyurl.com/4x2vbl). The other former Marijuana Party candidate stepped down soon after when people realized (a bit slowly on the uptake) that he, too, took drugs.

For myself, I was more concerned about Larsen’s politics. He was campaigning against “deep integration.” Within the sliver of sanity on this issue, some people oppose harmonizing regulations between Canada and the U.S. because they fear it will result in reduced sovereignty for Canada and in greater power for corporations.

Usually though, people who talk about “deep integration” see it as a secret plot for an American take-over of Canada. The NDP official website expresses the paranoia succinctly with a map of North America coloured all over with the stars and stripes of the American flag.

The NDP shares this paranoia with the 9/11 Truthers, another fringe group Jack Layton has cultivated. At a Calgary book signing, a member of the Calgary 9/11 Truth cornered Jack for an impromptu interview. A forthright politician might have said that, while some people may have gravitated toward truther ideas in all innocence, the notion that the September 11 terrorist attacks were an inside job represents the politics of bigotry: it’s a product of virulent anti-Americanism, antisemitism, or both.

Jack said nothing of the kind. Instead he volunteered that Barrie Zwicker – dean of the Canadian Truther movement – is a close friend. “I have all the [Truther] materials, which we study, ” Jack said. He added he was glad that, like the NDP, the 9/11 truth movement opposes deep integration (http://ca.youtube.com/watch?v=3mw-VhY6a2Q).

Not surprisingly, the NDP had a Truther candidate running in this election: Bev Collins, former president of the paranoid fringe Canadian Action Party. Last year Collins wrote an article predicting that the American take-over of Canada would be complete by 2010. “Are you ready for your children to be drafted under Bush's army?” she asked.

“To bring about this merging of Canada, US and Mexico,” Collins wrote, there may be: “Another false flag terror attack (http://tinyurl.com/3jcqfq).” In Truther talk, the original false flag operation was the attacks of September 11, apparently carried out by Arabs but secretly directed by the Americans themselves or, in the antisemitic version, by the Israelis / Zionists / Jews.

Lesley Hughes, another 9/11 conspiracy enthusiast, ran for the Liberals. She was asked to step down after a blogger discovered an article she’d written repeating the myth that Israeli businesses broke their leases to vacate the World Trade Towers just before the terrorist attack (http://members.shaw.ca/mclachla/page3.htm).

Given that Hughes was a regular contributor to Canadian Dimension Magazine and a member of its editorial collective, nothing that came out of her mouth should have surprised anyone. Canadian Dimension is the magazine of the Canada’s lunatic fringe and publishes people such as James Petras, who believes the “Zionist power structure” directs American foreign policy.

Indeed, the only surprising thing in the whole affair was that Hughes ran for the Liberals and not the NDP, given that Jack Layton had enthusiastically endorsed Canadian Dimension. (See here: http://www.engageonline.org.uk/blog/article.php?id=2106.)
After the Liberals gave Hughes the boot, there were calls for the NDP’s truther candidate Bev Collins to step down, too. But as Collins hadn’t made any antisemitic comments, Jack stood by her.

Jack’s wooing of the political fringes resulted in other questionable candidates running for the NDP, as well, such as El-Farouk Khaki, the NDP candidate for Toronto Centre.

Earlier this month, a young Muslim was convicted of belonging to an Al Qaeda–inspired terror cell that had acquired enough bomb-making material for several truck bombs. Khaki claimed the youth’s conviction just shows that in Canada, “Everybody who is Muslim who is accused of anything terror related is presumed to be guilty until proven innocent."

Khaki was a founding director of the Canadian Muslim Union – not exactly a moderate organization. According to the CMU: “As far as 9/11 and terrorism is concerned, those are well designed illusions, intentionally created to keep the simpletons of the world busy in irrelevant debates while the American imperialists take care of the real business of destroying others.”
The CMU claims the people plotting "the real business" are “Zionists, some Christian and others Jewish” (http://www.muslimunion.ca/20061003.html).

Another NDP candidate was Andrew McKeever. The Liberals demanded he step down after uncovering charming comments he’d made in a facebook group; such as: “Answer a direct f**king question you c*nt…. You are prejudiced and you are ignorant. You are a moron” (http://www.liberal.ca/pdf/docs/080925_facebook_mckeever.pdf).

But the NDP stood by McKeever until his comments on his MySpace page came to light, where among other things, he says: “I like the part in Schindler's List when the guard starts waxing the prisoners” (http://tinyurl.com/3vf36v).

As the prisoners McKeever so enjoyed being waxed in this Holocaust film were Jews, the Liberals labeled McKeever's remark antisemitic and again called for him to step down. This time he did, doubtless after a strong push from the NDP leadership (http://tinyurl.com/4wrewo).

So many certified members of the lunatic fringe ran in this weirdest of all Canadian elections that it would take another 1,000 words to enumerate them all. But in closing I must mention the Liberal candidate David Orchard.

Orchard is a kind of minor cult figure in Canada, particularly among the anti-American crowd. In his zeal to pin crimes on the U.S., Orchard has labelled the invasion of Afghanistan – in which Canada participated – a “supreme international crime,” comparable to the Nazi invasion of Europe. Presumably, then, Orchard considers the Canadian government of the time a bunch of war criminals. But that government included the present leader the Liberal Party, Stéphane Dion.

Now, the Liberals have always been a big tent party, a party that includes a wide diversity of views, but how Dion could bring himself to sign Orchard’s nomination papers is beyond me. Unlike Layton, Dion hasn’t actively wooed the political fringes, but with people like David Orchard and Lesley Hughes running for the Liberals, it looks like Dion doesn’t understand the difference between a big tent and a circus tent.